Europe is a continent that has a lot to offer and there are a lot of magical places to see. But I can’t help to feel that the Balkan Peninsula is the ˜Forgotten part of Europe. Yes, the living standard in these countries is lower compared to the rest of Europe and there are cultural differences between the two, but that doesn’t change the fact that there are a lot of hidden, beautiful places that don’t get the attention that they deserve. This Balkan off-the-beaten-track guide covers 9 must-see places in the Balkan that most travelers aren’t even aware they exist.

This Macedonian city is the home of the Ohrid Lake, the oldest lake in Europe. The lake is 2 million years old and it has a unique ecosystem, providing a home to more than 200 different species. Needless to say, the lake is on UNESCO’s heritage list, but the lake and its stunning beaches aren’t everything Ohrid has to offer. Ohrid is a city full of history and is also known as the Jerusalem of the Balkan. At one point in time, Ohrid had 365 fully functional churches, one for every day of the year. This changed after the Ottoman occupation, but most of those churches are still preserved even today.

This amazing city is located on the short Slovenian coastline, but not too far from the Alps. This gives Piran both, Alpine and Mediterranean characteristics. The city is the small Slovenian slice of Venice that’s going to win your heart. Being very close to Italy, the Venetian influence in the architecture of the city is easily visible, even for laymen. Even though it’s not a mainstream location I’ve heard a lot of people that visited the city say that it is the most beautiful city in the Mediterranean, despite the fearsome competition for that title.

I was going to mention Dubrovnik, but nowadays it has become one of Europe’s jet-set cities and Hvar is a completely underrated spot. A small island located in the Adriatic sea, Hvar has some of the most beautiful beaches in Europe. But just like Ohrid, Hvar has a lot more to offer than pretty beaches. The island also has its Old town with amazing Gothic palaces and cathedrals, some of which are 8 centuries old. Plus, Hvar is home to the oldest public theater in Europe. Impressive, right? For more hidden gems in Croatia, check out this article about the best hidden islands in Croatia. Mostar is one of the most iconic cities in the Balkan Peninsula. The city got its name from the famous 16th-century bridge that is a symbol of the city today. The name of the city Mostar is formed from the words most (bridge) and star (old). This iconic bridge has witnessed the birth of Yugoslavia after the partisans defeated the fascists at the battle of Neretva, and was also there to see the death of that same country in 1991. The city still wears a scar from that war, but that only adds to its unique charm.

Kefalonia really does have some amazing beaches and is a great vacation spot. But the most intriguing thing about this place isn’t the beaches, but a fairytale-like looking cave. Also known as the Cave of the Nymphs, Melissani Cave has a big lake inside of it. What makes this place even more amusing is that the roof is open and the sunlight reflects the crystal blue lake, giving the cave a vivid blue color. This creates the optical illusion of boats that look like they are floating in the air.

The Rila Lakes are sitting at between 2100+ meters above sea level surrounded by rugged mountain tops.  Each one of the seven lakes has its own name, like the Tear (the highest lake at 2500 meters), the Twin (the biggest among the seven) and the Eye (the deepest among the seven). The most amazing part is, if you look from above, the lakes look like giant’s footsteps leading up to the mountain tops.

This is according to many people. one of the best hiking spots on the Balkan Peninsula and the lakes are only an hour and a half away from the capital, Sofia. If you’re planning to visit this lovely country, check out my article about traveling to Bulgaria and our list of fun facts about Bulgaria. 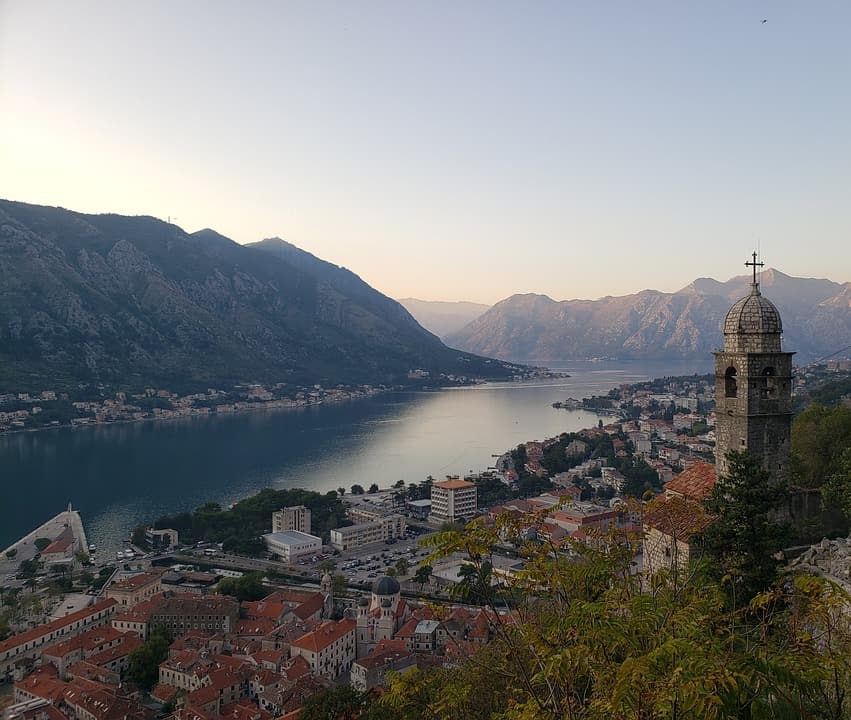 No Balkan holiday is complete without Kotor, a very Medieval town where the past and the present coexist. This small port town in Montenegro will make you feel like you traveled through time at least a few centuries back. The unusually well-preserved museums, gothic cathedrals, and Venetian architecture make Kotor one of the unique cities in the region, especially taking in consideration that the city is located in the Orthodox part of the peninsula. What’s even more amusing is that Kotor completely changes its appearance and gives you a glimpse of its charming nightlife: live music, bars, and castle top-clubbing.

Valbona is a must for all of you hiking lovers out there. Commonly known as ˜The Albanian Miracle of the Alps is surely a place that’s going to take your breath away. The remote mountain picks and the beautiful contrast colors that make this place look like a piece of art, rather than reality. The mountains are surrounded by lush green forests and in the valley flows the crystal clean Valbona River.

There’s also the charming Valbona village flowing in between the mountains. If this isn’t enough of a reason to visit Albania, you should also know that there are tours for the visitors of the national park that include staying with a local family in the village and eating home-made traditional food. It doesn’t get much better than that!

Liking this article? Then also check out my post about the best-hidden gems in Europe.

This list will finish with the ultimate winter vacation spot and one of the best skiing resorts in Southeastern Europe: Kopaonik in the south of Serbia. Located on halfway between the two capitals, Skopje and Belgrade, Kopaonik is famous for its incredible snowy landscapes and will make you feel the real winter charm of the Balkan. Kopaonik is just as beautiful as the most famous skiing resorts in Europe, but the prices (just like the other places on this list) are much more affordable!

Get up to 20% off on car rentals in the Balkan countries by using this link.

See the best of the Balkan with these Insight Vacation tours and get up to15% off!

Looking for travel insurance for your trip to the Balkans? My go to choice is always World Nomads.

For the cheapest flights to the Balkan countries, use this offer to save up to 50% with Qatar Airways.

For accommodation deals, use my Booking discount codes and save up to 15%.

Did you like this Balkan off-the-beaten-track itinerary? Would you like to visit the Balkans? Which places would you visit first? Feel free to share your comments below.

I spent two weeks in Ohrid....and I love the people!

I'm really glad to hear that Toby. My grandfather was from Ohrid :)

This post is just right for me. I love the Balkans and the amazing atmosphere that is there. And I also love visiting places off the beaten track. I'm not really interested in popular tourist destinations. For me, the charm has places that are unspoiled just like those you write about. I was on the island of Hvar and if I was to suggest anything, it is also worth visiting Stari Grad. It is not as popular as the city of Hvar but equally beautiful and in my opinion even more charming.

Thank you for your comment, I really appreciate it. I agree with you, Stari Grad is absolutely amazing!

Traveling is most fulfilling for me when I take the lesser known paths. This blog post talks about just that and I loved reading it.

I rarely read Macedonia in many travel websites and it is good to know that you choose this place as well. This is a true treasure!

Love that you covered the lesser known places! I've been to a couple but would love to checkout the other hidden gems!