The phrase city of contrasts often gets thrown around when it comes to travel-related articles. In fact, so much that it has entirely lost its meaning. I’m pretty sure that if you Google any city’s name and enter the phrase city of contrasts, there will be at least one article claiming that this particular city is a city of contrasts. You probably noticed that I also used this same phrase in my title and you must be wondering why did I start this article by criticizing the same phrase which I used in the headline of this article. The truth is, there really isn’t a better term to describe Skopje and I certainly wouldn’t like you to think that this is another generic article that revolves around another overused travel cliche. There are a lot of good reasons why should you visit Skopje and hopefully, this article will give you a few.

One of the least famous capitals in the world

Skopje is probably one of the least famous capitals in the world. That’s why you won’t find a lot of flights to Macedonia’s capital. From my experience, you can find the best deals on flights to Skopje through this Qatar Airways special offer. Skopje a city that was a part of five different empires. However, despite everything, Skopje is a city with a rich history and a beating pulse.

It’s a city that was ruined by severe earthquakes three times and was burned to the ground in the 1600s but still kept its identity. Skopje survived Alexander the Great’s Empire, the Roman Empire, the Byzantine Empire… It also survived five centuries of Ottoman Rule, socialistic Yugoslavia, the horrible earthquakes of 518, 1555, 1963, and being burned to the ground in 1689 only to lose its identity to the hands of its own Macedonian government…

Today, Skopje looks like a city with an identity crisis. The city center looks more like Disneyland than the capital of a Balkan country. The worse part is most of the monuments around the city square aren’t even related to Macedonian architecture or history. These monuments were built as a part of the previous Government’s most controversial project: Skopje 2014. This was a project that used millions of euros of taxpayers’ money to basically build a giant theme park. 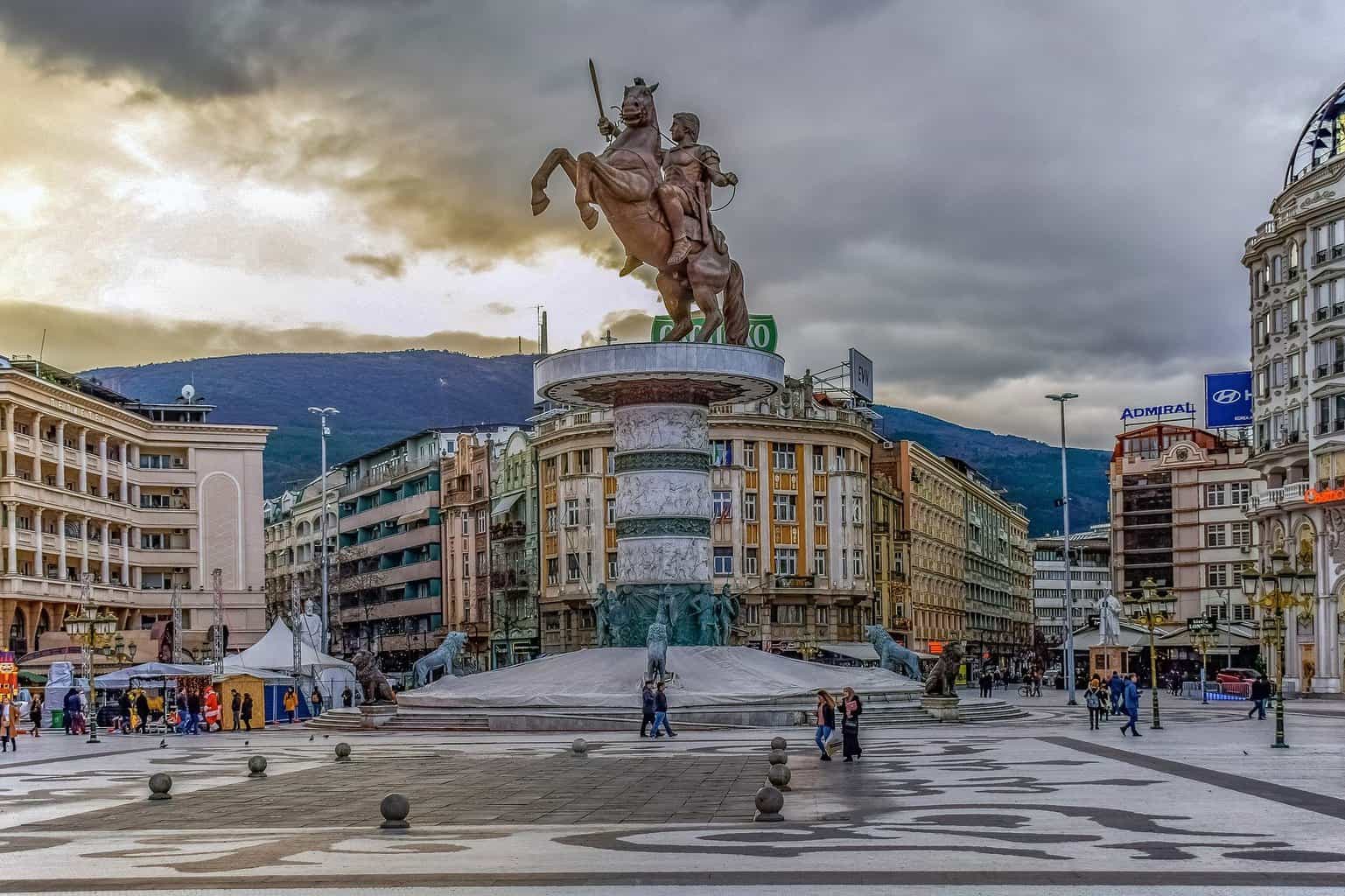 The spending was focused solely in the central area, making this part of the city even more different than the rest of Skopje. However, if you walk just 300 meters down the square, away from all these glamorous monuments that cost the Government budget hundreds of millions of euros, you will be confronted by poverty and homeless people that don’t own anything. That’s not an exaggeration. Nonetheless, these are not the contrasts that I will write about in this article…

The divide between the east and the west

You would be even more surprised if you only take a walk from the main City Square, across the oldest bridge in the city, Stone Bridge, and get to the Skopje Old Bazaar. The first time I did this, it was shocking. After crossing the bridge, I went from feeling like I was in Paris (Skopje also has its own Arc de Triomphe, by the way) to feeling like I was somewhere in the Middle East.

Once you cross that bridge, you will notice the Old Bazar. This is one of the most beautiful and authentic parts of the city but also a one that shows the obvious divide between the two largest ethnic groups in Macedonia. Today, the city looks more than ever, like divided between the Christian (Macedonian) part and the Muslim (Albanian) part. This makes it one of the most unique capitals in the world.

Read more about traveling to Albania.

Ð¢he new (partially), westernized part is where you will find the most famous bars, nightclubs, modern restaurants, and churches. Here, you can feel the former socialist, laid-back atmosphere, characteristic for most former socialist capitals. Interestingly, all cafes and restaurants surrounding the square are full of people all the time, including typical working hours.

Only 200 meters east, the laidback atmosphere is still present but the picture is completely different. This is where you can feel the Ottoman character of the city. Here you will find the best kebab in the city, colorful streets, Islamic architecture, women wearing hijabs, mosques, and people drinking Turkish tea instead of coffee.

Why Skopje is the ultimate city of contrasts?

While most ‘cities of contrasts’ are called so only because they are home to both rich and poor people, and have both, modern skyscrapers, and old historic buildings, Skopje is a city that can make you feel like you’re in two completely different parts of the world, without ever leaving the city. If that’s not enough, you can also take a short bus ride to Shuto Orizari in the city outskirts. In Shutka, you will find the world’s largest concentration of Romani population.

If you’re traveling around this region, also check my guide about traveling in Serbia.

The largest Romani settlement in the world

Romani people are a once nomadic group, believed to have arrived from India hundreds of years ago and no they’re not from Romania! Today, in Europe there are more than 12 million Romani. This makes them one of the largest minorities on the old continent. In many countries, Romani people are oppressed and discriminated, especially in Eastern Europe.

However, in Shutka, they even have their autonomy. This is the only Roma-run municipality in the world and one of the rare ones where Romani are politically organized. However, not everything is ideal in Shutka and it’s still one of the poorest municipalities in the country. In fact, it’s probably the only place in Macedonia where you can see a brand new Audi A8 followed by carts pulled by elaborately dressed horses.

Shutka is also home to one of the cheapest markets in the city. Here you can find literally anything for half the price you normally would. In fact, this market is the only mean of existence for most of the people that live here. Despite everything, Shutka still faces a lot of challenges and just adds another layer of contrast to Macedonia’s unusual capital.

Related: everything you need to know before traveling to Bulgaria.

For the cheapest flights to Skopje, this Qatar Airways special offer can save you up to 15%. It is an affiliate link but I also use it when booking my flights to and from Skopje.

For the best travel insurance for your trip to Skopje, consider getting one of these World Nomads deals.

Looking to rent a car in Skopje? This page can help you save 15% on all car rentals.

Last but not least, if you want to save on accommodation, this Booking discount code and this IHG Hotels special offer can get you up to 15% off on all accommodation rentals in Skopje.

A few words for the end

Finally, another very unique thing about Skopje is its architecture and its surrounding, untouched nature that’s just a short ride away from the city (such as Vodno Mountain, Matka Canyon, Kozjak Lake, etc.). Skopje has a lot of new, baroque architecture in the city square but you can also see some impressive, old brutalist buildings from the socialism era.

And if you explore Skopje, you will see that it has a very different architecture than all the other Yugoslavian capitals. This is mainly because of the severe earthquake of 1963 that completely changed the look of the city. After the earthquake, the city hired Kenzo Tange, a Japanese architect with very unique ideas, to plan the rebuilding. His futuristic style combined with the already existing socialist, brutal architecture gave the city a completely new look. This created Skopje’s own futuristic urbanism, still noticeable in parts of the city.

Nice article. We visited Skopje last year. Major identity crisis going on here! I loved the old Bazaar and the Ottoman architecture, not do keen on the gaudy statues. Thanks for sharing.

Unfortunately yes! I'm glad to hear you had a nice time tho. Thank you for commenting

The baroque architecture of kopje is something that the natives must be proud of! I've never heard of the place but it seems worthy of a visit.

Actually, not really Nina. The baroque has never been a thing in Macedonia and many locals despite the project because it spent millions of euros of taxpayers money on statues and architecture that have little to do with Macedonian history

What a fascinating article! I must admit that I had never really heard of Skopje before, but now I am really interested in visiting. It must be an amazing place to experience.

I'm really glad to hear that, Monique. It certainly is an amazing place :)

Nice description. I could almost see how the city of Skopje looks like. I think diversity like this make a place more interesting.

Thank you for your comment, Summit. I really appreciate it :)

I always wanted to go to Skopje, it looks so cute and cozy. I love exploring less know destinations