13 Unique things to discover while visiting the Canary Islands 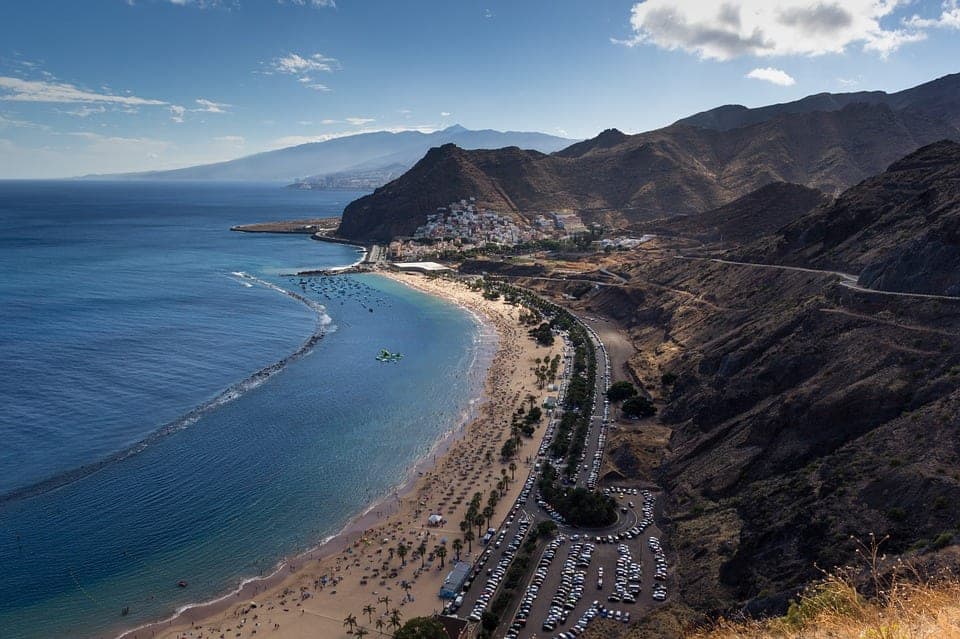 Table of Contents show
1 Visit an isolated mountain village
2 Hear the world’s most unique language
3 How about a 7-km-long volcanic tube?
4 See a snow-covered volcano
5 See the unusual lava formations of Montaña Amarilla
6 Climb a volcanic rock
7 Check out the iconic rock formations of Roque Agando
8 How about a Sea of Clouds?
9 Unique gigantic rocks rising from the sea
10 Discover a humid subtropical forest
11 A different world of sand dunes
12 The pools of Charco Azul
13 See the Canary Islands from above
14 How expensive visiting the Canary Islands is?

Hidden behind Los Gigantes Mountains lies one of the most remote and beautiful villages on Tenerife. Most visitors are left speechless after witnessing the natural beauty of this charming mountainesque village in the middle of nowhere. Once upon a time, there weren’t any roads and the only way to reach the village was by a donkey-taxi. Today, there’s a bumpy, narrow road leading to the village and a lot of tourist agencies organize day-trips to Masca. Talking about unique experiences, the Canary Islands are the only place where you can…

Hear the world’s most unique language

Silbo Gomero is a communication system (or let’s call it a language) that consists of whistling. It has traditionally been used by the people of La Gomera to communicate across the deep ravines and narrow valleys of the region. Because of these unique geographical features, one can hear the whistling noises as far as 5 kilometers away! Sure, nowadays we have phones and other modern means of communication, but locals still think el Silbo Gomero is the best communication method.

If you’re around, focus and listen carefully- you probably will hear the whistling noise around the valley! It’s a very peculiar language and one that sure is difficult to master, but you should at least learn some basic Spanish before you go. For this, you can use Babble, one of the best language learning platforms online. Sounds interesting? Use this coupon and get up to 15% off.

Flying to the Canary Islands? Use this special offer from Air France and save up to 20% on your flight.

Talking about only in Canary experiences…

How about a 7-km-long volcanic tube?

Lanzarote Island is worldwide famous for its beautiful beaches but even more for the island’s volcanic landscape. One of the most spectacular things on the island is the 7-kilometers-long volcanic tube extending from La Coruna mountain to the coast with part of it being located below the sea surface. This spectacular site was created more than 3,000 years ago when the subterranean lava emptied into the ocean, leaving a molten river of lava underground.

This molten river of lava eventually cooled and developed a solid crust, creating a fascinating series of lava caves stretching across the island. Talking about volcanoes, the Canary Islands are one of only a few places on Earth where you can…

Even if you haven’t visited the Canary Islands, you probably heard about Teide National Park. It’s one of the main tourist attractions on Tenerife. The national park is home to the highest mountain in Spain and the highest volcano in the Atlantic. The Teide Volcano is also the tenth-highest active volcano in the world and one of only a few places on Earth where you can see a snow-covered volcano.

The volcano’s last eruption happened in 1909, and you can still see lava flows and huge craters in several different places across the island. If this sounds interesting, you’ll definitely want to…

If you’re a fan of trekking and like to explore unusual lava formations, you’ll love Montana Amarilla. On this route, you’ll find an old volcanic crater and a natural landmark that was created after a volcanic eruption that will take your breath away. This natural monument located on the coast of San Miguel de Abona is a rare phenomenon that happens when lava mixes with seawater and can be found only in a handful of other places on our planet. And if this doesn’t impress you, perhaps you will be if you decide to…

Roque Nubio (Cloud Rock) is a dramatic natural formation that happens to be one of the world’s largest natural crags. Located more than 1,800 meters above sea level, this rock has been an ancient place of worship for the indigenous people of the island and a protected area since 1987. El Roque Nubio is a bit hard to reach, but once you get there, you’ll love the view. The Cloud Rock is located at the center of Gran Canaria, giving a fantastic 360-panoramic-view of the whole island. If this sounds interesting, then you should also…

Check out the iconic rock formations of Roque Agando

Roque Agando is one of the most spectacular views on the Canaries and a place you wouldn’t want to miss. This is arguably the most scenic trek on the islands even though climbing to the top is forbidden. The site has been a protected area because apparently, it had a great significance among the indigenous Barber inhabitants.

They built several sanctuaries and ancient sacrifice sites in the mountains and they were in good condition until the 1980s’ when they were rooted during the filming of a documentary. After this incident, the top of the mountain is inaccessible, but el Roque Agando is still one of the most spectacular sights on the Canary Islands. Talking about spectacular views…

How about a Sea of Clouds?

La Cumbrecita viewpoint is a natural balcony with an amazing view of Taburiente National Park. While you’re going for a long stroll in the woods, once you start feeling like you’re lost in an interminable stretch of greenery, you’ll see a giant crater that seems to be separating the forest in half, giving you a view of a stunning, 6-kilometers long, natural basin.

Even though this is an amazing experience as-it-is, it gets even better. If you’re lucky enough, you might even see the so-called “Sea of Clouds”, making its way into the valley. It’s a spectacular sight and one of the most iconic views on the Canary Islands. Since we mentioned iconic views, I have to tell you about…

Located on the western coast of Tenerife, Los Acantilados de Los Gigantes is a real wonder of nature and a sight that can’t be seen in a lot of other places. Los Gigantes is a vertical 500-meters-tall wall of vertical cliffs that rise from the sea. Needless to say, this fascinating rock formation can be seen from pretty much anywhere on the island.

In fact, it’s harder to miss it than it is to find it. Come here for sunset if you want to get some amazing pictures of the sun setting over Tenerife and one of its most iconic natural attractions.

The Garajonay National Park is one of the most precious natural wonders of the Canary Islands because the park is home to the largest continuous area of laurisilva forest. Laurisilva is a habitat that was historically present throughout Southern Spain and the North of Africa.

However, nowadays, Garajonay National Park is one of the last remaining places where you can see it. The forest is biologically diverse, but a lot of the flora and fauna inhabiting it is endemic with more than 50% of the species being officially protected by the authorities. Since national treasures of Spain are the topic, I just can’t forget to mention….

A different world of sand dunes

If you ever get tired of stunning beaches, forests, and volcanoes, the Canaries will find new ways to surprise you. One of those surprises will be the sand dunes of Maspalomas. Stretching over an area of 400 hectares, the Maspalomas Dunes has been protected as a nature reserve since the 1980s’. And there’s a good reason for that. The dunes were formed under the influence of the Atlantic Ocean and the strong western winds of the Canaries.

These spectacular ridges of sand have been created during the last ice age when the strong winds gradually moved the sand from the bottom of the ocean during the tide. Today, Maspalomas is a habitat of an array of rare plant species, some of which can only be found here. Another thing that can be found only on the Canary Island is…

The pools of Charco Azul

Situated on El Hierro- arguably the least-known and most remote one of all the Canary Islands, the bathing pools of Charco Azul are a gorgeous volcanic creature filled with beautiful turquoise waters. It’s still one of the most peaceful places on El Hierro and a bit difficult to reach. Located in the remote coastal borough of Los Llanillos, the pools of Charco Azul are one of the last remaining unspoiled hidden gems of the Canary Islands.

Most tourists still don’t know about this place but it has been getting some more attention lately. So, if you want to visit without the place being crowded, I suggest you hurry up.

Enjoying this post? You may also want to check out our ultimate Northern Spain itinerary.

See the Canary Islands from above

If you want to do something different on the island, an option would be to go paragliding in Tenerife. The possibility of seeing the island from 2,000 meters above is a daring adventure and an experience you’ll never forget. This is one of the best adventures in the Canary Island. I know, by now, you’re surely starting to like the Canary Islands but you’re also wondering…

How expensive visiting the Canary Islands is?

Save 10% on car rentals on the Canary Islands by using my AutoEurope coupon.

Next
Florence off the beaten track: 15 hidden gems in Florence you didn't know about
Click here to cancel reply.

I am shocked by how many different landscapes and terrains exist on a relatively small group of islands! This looks like enough different terrains to fill an entire continent! Those villages also look like lovely places to stay. Thanks for sharing this truly beautiful place.

Indeed, Kevin! The Canaries are fascinating

I've tried a similar mode of communication in the jungle of Mexico and Borneo. It's cool to know that there's a name for it other than whistling lol. Also, such a great list of things to do in the Canary Islands.

It's really cool to learn about that, Christine! Thank you for your comment

The Canary Islands has lot many things to do with wonderful beautiful nature scapes. Snow covered volcano must be a unique thing to witness here. Also, those lava formations look interesting.

There sure are Yukti- the Canaries are full of surprises :)

Wow! I have seen a snippet on National Geographic about the people of La Gomera and their ancient way of communicating. It must have been fascinating to witness it first hand. The island looks like a wonderful place to chill. I had no idea it was so beautiful.

It sure was, Janine. I hope you experience this someday :)