When islands are the topic, most people imagine sunny places of unspoiled, pristine natural beauty where you can stay on the beach all day, relax and do nothing. But not all islands are a slice of paradise. There are some horror islands on our planet that attract travelers, not with their sunny beaches but with dark curiosity. From abandoned prisons and asylums to nests of paranormal activities, here are the names of some scary, haunted islands around the world you wouldn’t want to visit.

This is the most active location in the prison when it comes to paranormal activity. Rumors have it that there were multiple occasions in which inmates screamed in terror throughout the night, claiming that an evil creature was strangling them.

According to multiple sources, over one million people are buried in the deep pits of Hart Island. In the past, this creepy island served as a narcotics rehabilitation center, a prison, a women’s asylum, a Cold War missile base, and a quarantine zone for yellow fever.

Hart Island is known as the Island of the Dead and for a good reason. Over 85,000 bodies were discovered in mass graves so far and this number continues to rise. Today the island is home to a prison and inmates have reported several instances of paranormal activities in the past.

When scary island names are the topic, no island has a better name than Deadman’s Island. According to the historical chronicle about the aftermath of the period when Squamish people inhabited British Colombia, something very strange happened on this island. During the war between the northern and southern tribes on the island, the Southerners captured 200 northern warriors and killed them on the spot. The next morning, the southerners found flaming fire flowers on the same spot where they threw the bodies. After this, they immediately fled the island in horror.

Additionally, the list of paranormal activities on this creepy island continued to grow over the last 100 years. Many people claim to have heard sounds of breaking glass, inhuman screams, spooky chanting sounds, glowing eyes in the fog, mysterious lights, etc. There were attempts to turn the island in an amusement park and later, a navy base but both plans were unsuccessful due to reasons unknown to the public.

Enjoying this post? Check out my post about travel writing tips to see how I keep coming with unique ideas for new articles. 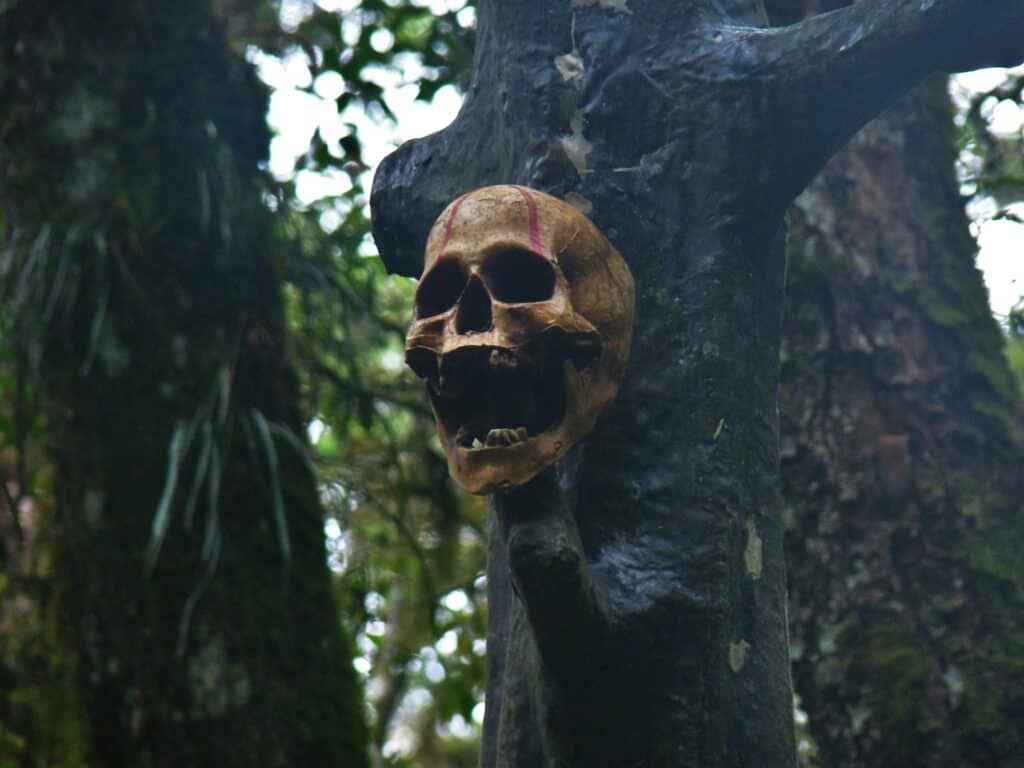 Back in the 1950s, the only resident of this island was Julian Santana Barrera. One day at the shore, he found the body of a little girl who drowned under mysterious circumstances. Supposedly, the girl’s ghost haunted Julian, and to please her, he started hanging dolls from every single tree he could find on this creepy island. There are recent stories of witnesses who have seen the dolls move and whisper in the night.

To make everything even more strange, 50 years later, Julian drowned himself on the same spot where he found the girl’s body.

There have been multiple cases of paranormal activity reports on the island but two particular places stand out. The first one is the Botanic Gardens, located at the same place where the Royal Hospital for Chest Diseases used to be. There were multiple reports of strange men weeping and groaning in the garden.

The other one is the old manor house of Knighton Gorges. This house has been demolished since the 1800s. However, supposedly a ghostly apparition of the manor appears every New Year at midnight.

Anyway, these two supposedly haunted destinations don’t scare tourists away from the Isle of Wight. It’s actually one of the best holiday destinations in the UK. 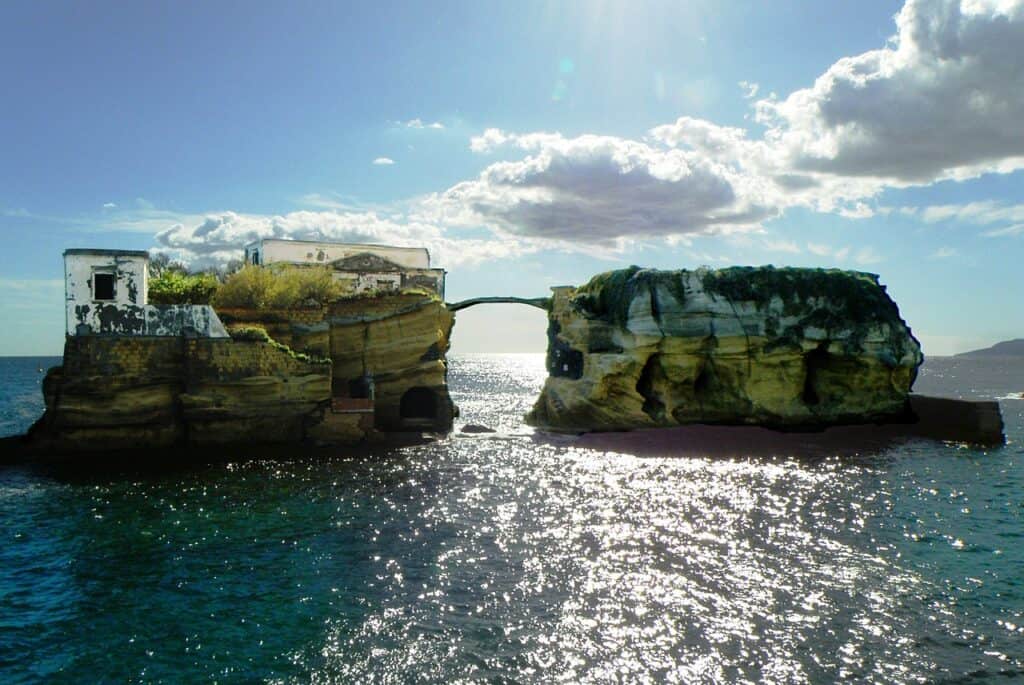 When speaking of haunted islands, Isola La Gaiola deserves a special mention. This deserted island in the Gulf of Naples was once a symbol of wealth. However, a series of unfortunate mysterious events changed this. In the 1920s’ the body of the then-owner appeared inside a rolled-up carpet. Otto Grunback from Germany was the next owner but not for long. He suffered a heart attack shortly after buying the property.

The next owner, a pharmaceutical tycoon from Switzerland committed suicide. Gianni Agnelli, the head of Fiat and the next owner, suffered a similar faith. His nephew was the next owner and he died from an extremely rare type of cancer. The last owner was kidnaped shortly after buying the island. Isola La Gaiola has been on the market ever since.

Back in the 1800s, this island served as a quarantine station for the Bubonic Plague. According to several sources, residents that had even the slightest signs of illness were thrown here against their will. If these rumors are true, that means that roughly 50% of Poveglia’s soil is composed of dead human remains.

In the 1930s, the island became an asylum, where a doctor performed horrifying experiments on the patients. Eventually, the doctor went mad and threw himself from the island’s bell tower. The bell tower was later removed but locals still claim they can hear it echoing from the isolated island.

In recent years, several Italian construction companies attempted to restore the old hospital building but ended up abruptly stopping all activities without explanation. Today, this creepy island is closed for both, locals and tourists. These two haunted islands are just a drop of the things you can see only in Italy and nowhere else on our planet.

The owners of Daksa have been struggling to sell the island since 2013, eventually lowering the price to $1.5 million. This is a ridiculous price for a 12-acre private island with several historic buildings. Not only there is no buyer for this island but people don’t even want to go anywhere near it. Daksa was the scene of a brutal massacre in 1944, where 53 suspected Nazi collaborators were executed, with their bodies left to rot in the open. Ever since there were multiple stories about paranormal activities.

In 2009, locals discovered several mass graves on the island. Shortly afterward a detailed search by the authorities lead to finding even more remains of adult mails across the island. Most of the victims’ identities remain unknown and most locals today avoid going anywhere near the island, making Daksa a perfect fit for this list of the most haunted islands in the world.

Vorozhdeniya (Rebirth Island) was one of the biggest biological test sites in the world during the Soviet era and today, it’s one of the scariest haunted islands in the world. Genetical engineering of bubonic plague, anthrax, and smallpox took place on the island, taking a lot of lives along the way. The scientists also released these substances into the air and recorded the effects on livestock. In 1988, authorities tried to destroy the evidence of their weapon programs by drenching the entire anthrax stock in bleach, sealing it in stainless steel drums, and burying them. This plan didn’t work and anthrax started seeping through the soil.

This also poisoned not only the island’s earth but the groundwater too. Today, the complete eastern basin of the Aral Sea has dried up completely as a consequence. No wonder, this scary island has the nickname “ticking time-bomb in the heart of Asia”.

This list of scariest islands in the world wouldn’t be complete without Corregidor Island; the island where one of the largest mass suicides in human history took place. During World War 2, the Japanese took control over the island in 1942 but the Americans eventually recaptured it in 1945. After the final battle, 3,000 Japanese soldiers chose to commit suicide to avoid capture by sealing themselves in the numerous subterranean passages of the island. According to stories from the locals, some of these Japanese soldiers never left the island…

Related: Looking for a different experience in the Philippines capital? Check out this list of hidden gems in Manila.

There are a lot of unique things you can only find in Japan and it’s no surprise that the Land of the Rising Sun has a representative on this list of the world’s scariest islands. Okinawa has a similar history to the one of Corregidor. During World War 2, the island witnessed 82 days of destruction which took the lives of 13,000 American soldiers, 90,000 Japanese soldiers, and over 100,000 civilians. In the end, the remaining 4,000 Japanese soldiers committed mass suicide to avoid getting captured by the enemy. In the years after the war, there have been multiple stories of haunted hospitals, eerie hotels, re-occurring suicides at odd locations, and even construction work getting interrupted over reports of paranormal activities.

At first sight, Norfolk is a wildly picturesque, remote island but it’s actually one the most haunted islands in the world. Norfolk Island used to house the most violent criminals in the world in the 1800s. The unlucky fellows who ended up here were kept in inhumane conditions, were tortured and brutally murdered on the island. However, unlike other haunted islands on this list, locals used the paranormal activity rumors to attract tourists. Roughly 30,000 tourists visit Norfolk Islands every year haunting for ghosts.

Pretty great list. Poveglia, Italy always intrigued me. If I had the opportunity to visit it, I would. I would definitely visit the island of the dolls. I have a friend who is heading there sometime this year!

It sure sounds like an intriguing island, Crystal. A visit can be arranged with some of the local boat owners. They will take you to the shore but they won't stay there with you. Everyone is trying to stay away from this island :)

It might be really terrifying if one plans to visit these islands. I have always stayed away from such haunted areas as I get quite freaked out on even learning about them.

Well, these places have that effect on most people :)

I heard a lot on Corregidor Island in my country. There’s a lot of horror stories because of the previous war that occurred. I heard a lot of freaky stories from my friends that’s why I haven’t visited it yet. I don’t have any plans in the future.

Indeed, there are, Emman. Thank you for your comment, I really appreciate it.

My husband and I visited Okinawa years ago. We knew there were American soldiers stationed there during WWII but didn't even know it was haunted! We had a fabulous time though! Now I wonder where are the eerie spots.

There are a lot of intriguing stories surrounding the island :) It's interesting how you didn't at least hear about any of them

The story about Corregidor Island is also interesting. I have friends who have experience their presence during their trips, and at night. But the whole island is totally gorgeous! I like to visit again :D

Indeed, Blair. All these stories make the island a lot more intriguing.