Everything You Have to Know Before Taking an Everest Helicopter Tour

If you want to enjoy the spectacular views of the tallest mountain in the world, without actually climbing Everest, taking a helicopter tour to Mount Everest should certainly be on your list. A lot of people don’t even think about this option because they think it’s too expensive but with the increased number of tour operators nowadays, there are a lot of affordable options. Flying over this massive mountain that draws thousands of explorers every year is a feeling that words do little justice to. The vastness of this endless stretch of snowy mountains lifted high above the level of human habitation among the wildest expanses of nature will remind you what a tiny place you occupy in the world.

Table of Contents show
1 Mount Everest by helicopter: how does it go?
2 Is it safe?
3 Who can go on an Everest base camp helicopter tour?
4 How much does a helicopter tour to Everest cost?
5 When is the best time to do this?
6 Things to bring with you
7 Highlights of the journey
7.1 Beautiful Aerial view of the Everest Region
7.2 Observe life in the isolated mountain villages
7.3 The highest freshwater lake on Earth
7.4 The landing at Kala Patthar
7.5 The highest glacier on Earth
8 Can you get to the top of Mount Everest via helicopter?

Mount Everest by helicopter: how does it go?

by Daniel Oberhaus CC BY SA 4.0

Most Everest helicopter tours are done in a day and you can choose different routes depending on your starting point. The most common route is Kathmandu-Lukla-Kala Patthar-Kathmandu, with most operators making a stop in Lukla to refuel. You can also start your tour in another city, but keep in mind that it will cost a lot less if you start in Kathmandu or Lukla. The average tour takes around 4 hours but some tour operators can provide you with a tour that includes more ground time for an additional fee. However, keep in mind that you’ll be landing at Kala Patthar, sitting on an altitude of 5545 meters. At this height, the oxygen level is very low and there’s a high chance for altitude sickness.

You can choose to take a shared or private tour, with the latter one being a lot more expensive. Different models of helicopters have a different weight limit, but most tour operators have choppers with a maximum combined weight of around 500 kg for a twin helicopter and around 250 kg for a single helicopter.

Reaching the Everest base camp via helicopter is pretty safe. Helicopter crashes are a rare occurrence and there haven’t been many registered casualties according to official reports. The airport in Lukla is notorious for being the world’s most dangerous airport because of the short runway and difficult approach. However, most tour operators do this daily and their pilots are experienced and have a sound knowledge of the terrain.

Who can go on an Everest base camp helicopter tour?

These helicopter tours are designed for everyone that can’t reach Everest base camp on foot for different reasons. After all, this is one of the most difficult treks in Nepal. Although many people dream of reaching the top of the world, their physical strength and health conditions may stop them. This tour is also great for people that don’t have a lot of time and want to make the most out of it. There aren’t any age restrictions and everyone, from senior citizens to children can join a helicopter tour. The only limitation is the weight limit of choppers. As mentioned above, a single chopper will not be able to transport more than three people with a combined weight of 250 kg and if you exceed the weight limit, you might need to take two choppers which will obviously increase the tour cost significantly. Talking about cost, let’s see…

How much does a helicopter tour to Everest cost?

The cost for a helicopter tour to the Everest base camp depends on several different factors, including the itinerary, services, facilities, and the number of people. If you join a group tour, this will usually cost between $950 and $1200 USD, depending on whether you’re booking as a group or as an individual. Alternatively, if you want to book a private helicopter, the estimated cost is between $3,700 and $4,300 for a single shuttle and between $4300 and $5,500 USD for a double shuttle. However, don’t forget about the weight limit. If your group’s combined weight is over the limit, you’ll probably have to take another shuttle and pay around $700 USD for booking an extra shuttle.

Most tours don’t include a meal, so you have to add this to the total costs (around $20-30 USD per person), as food and drinks are quite pricy 5,380 meters above sea level. Also, you have to add an additional $30 for obtaining a permit for the national park you’ll be entering during the tour. So, in total, if you’re planning to join a group tour, this will cost between $1,100 and $1,400 per person.

Liking this article? Check out my post that covers everything you need to know about the cost of Annapurna base camp trek.

When is the best time to do this?

The Mount Everest by helicopter tours are available throughout the year but the weather conditions can have a significant influence. It’s not recommendable to take this tour during the monsoon season due to decreased visibility. This is also the main reason why a lot of flights get delayed during this time of the year. The best time to take helicopter tours in Nepal is during autumn and spring when the amount of rainfall is significantly lower and the sky is a lot clearer. This is also better for you as a passenger because you will be able to take some amazing photos and videos of Mt. Everest without having big clouds and fog in the way.

In case you’re wondering, autumn in Nepal starts in September and lasts until November, while spring starts in February and lasts until April. The average temperature during spring and autumn usually ranges between 15 and 20 degrees which also means you will also avoid the extremely cold temperatures of the winter and the scorching sun which is around during the summer months.

Related: Trekking the Manaslu Circuit- everything you need to know.

Things to bring with you 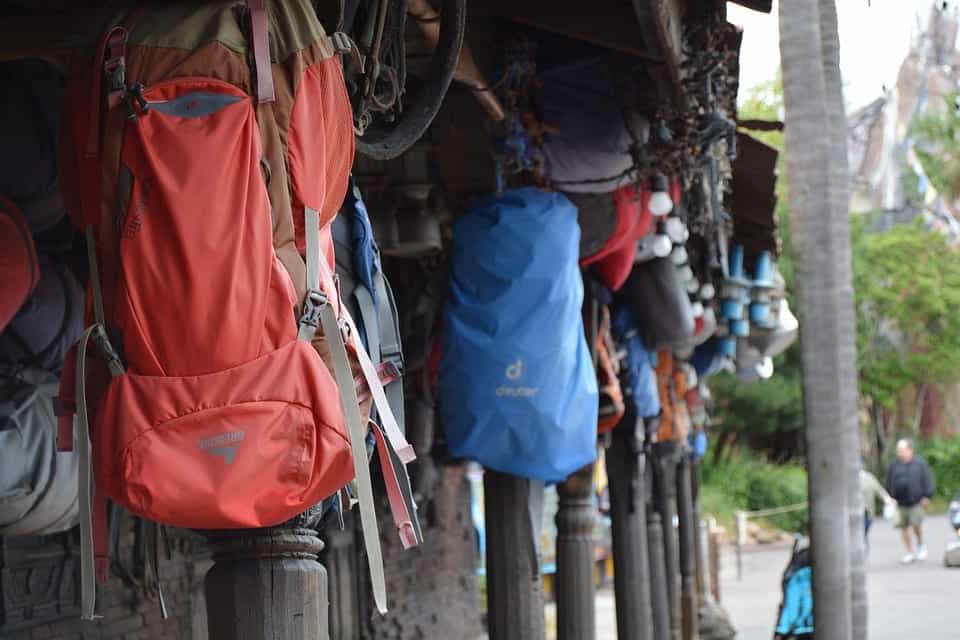 As this is 3-4 hours tour, you don’t need to spend hours of research to find the best hiking gear and sleeping bags. Due to the weight limits, you can’t take a lot of things with you, that’s why you should pack smart and bring only the most necessary things. For starters, take some warm clothes, even if you’re visiting during the spring because the temperatures are still a bit chilly in the high altitudes.

Also, don’t forget to bring some sunscreen and a sun hat because even though the weather isn’t hot, it’s very easy to get sunburns at higher altitudes. Bring some drinking water but not more than one or two bottles. Water isn’t easy to get 5,000 meters above sea level. Also take some light snacks to help you go throughout the journey and of course, don’t forget to take a good camera to record your exciting adventure.

Looking for a different experience in Nepal? Check out my trekking guide to Tsum Valley.

Highlights of the journey

Flying over some of the tallest mountain peaks in the world is certainly an experience that lasts a lifetime. Some of the tallest peaks you’ll see during this journey are Mera Peak, Kursum, Kangaru, Kantega, Mutspe, the Island Peak, and many more.

Do you want to explore Nepal off the beaten track? Then, you’ll definitely like my guide to Nar Phu Valley.

The highest freshwater lake on Earth

The area surrounding Gokyo Lake is personally, my favorite part of Nepal. Comprising of six gorgeous oligotrophic lakes, Gokyo Lakes are the highest freshwater lake system in the world, located at an altitude of nearly 5,000 meters.

The landing at Kala Patthar

Because landing at Everest base camp is difficult, most operators land at the nearest possible spot and that’s Kala Patthar. This is where you’ll spend most of your ground time. Sitting on 5545 meters above sea level, Kala Patthar gives a great view of the top of Mount Everest and is one of the most spectacular viewpoints in Nepal.

The highest glacier on Earth

Khumbu is the world’s highest glacier and one of the most spectacular wonders of nature on our planet. The glacier has a large icefall that moves very fast and crevasses open very quickly, making this one of the largest and most dangerous obstacles on the way to the Everest summit.

Can you get to the top of Mount Everest via helicopter?

by Daniel Oberhaus CC BY SA 4.0

It’s difficult enough even to land at the Everest base camp and not yet on the top of the mountain but apparently, it is possible. In 2005, a French pilot by the name of Didier Delsalle landed on the world’s tallest mountaintop. Until this day, he is the only person to complete this endeavor. He even did it two times in two days. However, tour operators don’t have a commercial tour to the top of Mount Everest because the journey is very risky. The atmospheric pressure is very low, oftentimes even too low for helicopter rotors to function, the winds are very strong, and the weather conditions are bad most of the time. So, the short answer is no, you can’t get to the top of Mount Everest with a helicopter tour.

Are you considering to take a helicopter tour to Mt. Everest soon? Did this article answer all of your questions? Let me know in the comments!

Next
How to stay healthy while traveling and avoid getting sick
Click here to cancel reply.

Hi,...Greetings from Scotland. My name is Jeff Clark and i enjoyed your article which i read with some interest as i'm considering making an EBC Heli' Tour (maybe as a solo passenger)should my Covid postponed trip to India/Nepal this year hopefully go ahead next year(2022). As part of the overall EBC Heli'Tour experience, i was wondering if you would by any chance know if the designated route of the helicopter's flight-path will also include taking in/continue on up over the Khumbu Icefall and / to Camp 1 and Camp 2 in the Western Cwm before returning back down over the Cwm and the Icefall en-route to EBC etc. Very much appreciate both your time and any assistance you are able to lend. Thank you. Jeff Clark.

Hi Jeffrey, thank you for your comment and sorry for the delay in my reply. I've been swamped with work recently. Honestly, I'm not sure as there are many tour providers who offer these services. Personally, the one I took didn't but I believe that if you insist on covering this destination, you might be able to arrange this with a tour operator if you notify them about your plans in advance. I would suggest you try contacting a few of them before your trip and I wish you a safe and exciting trip to Nepal :)