Studying abroad is one of the most life-changing experiences for young people. Getting a degree from a well-ranked foreign university while learning a lot about a new culture and pushing yourself outside of your comfort zone is the best thing that can happen to you in this stage of life. Unfortunately, not all of us have the chance to pursue the degree we want in our native countries. However, we live in an era where it’s easier than ever to study abroad and fulfill our dreams. Are you thinking of studying abroad and wondering where to start from? Here are the 11 best study abroad countries that attract the most international students.

The United States of America

To start this list of the best study abroad countries, we need to mention the country with the best higher education system in the world. US universities dominate all relevant lists of the best universities in the world; it’s no surprise that they’re the number one choice for the world’s most ambitious students. Especially if you’re pursuing an engineering degree, most top universities in the USA have impressive, state-of-the-art research labs where a lot of important discoveries were introduced to the world.

However, getting in at some of the top universities in the US isn’t an easy task. The competition is very tough and this is something not everyone can take. Even the entrance exams (or essays) are very difficult. Universities like the University of California have some of the most unorthodox essay prompts and the task of writing a UC application essay is anything but easy.

Britain is another country where you will find high-quality research labs at the majority of educational institutions. Great Britain had the best higher education system in the world for years before the emergence of the best US universities and it’s still a country with some very good universities, like Oxford and Cambridge. Getting enrolled in these universities is rather difficult, though. Only fifteen percent of all applicants manage to secure a place at this educational institution after the interview round.

Canada has become one of the most popular choices when it comes to the best study abroad countries. There are tons of educational institutions in Canada that use modern teaching approaches and encourage their students to conduct their own research studies. Some of them, like the University of Toronto, the University of British Columbia, and the McGill University are a great alternative for students who can’t afford to pay the high tuition fees of US universities. There are also a lot of decent universities in cities like Montreal and Ottawa.

With seven universities in the top 100, only the UK and the US have more top 100 universities than Australia. Additionally, numerous credible sources suggest Australia as one of the best study abroad countries. Even more, students that choose Australia have plenty of things to enjoy and admire outside of the classroom as well. From the Great Barrier Reef to unique animal encounters, Australia has a lot to offer.

In case you are looking for an educational institution in Europe with impressive research facilities, Switzerland has plenty. The Swiss Federal Institute of Technology in Zurich is (at the moment of writing this article) the 6th ranked university in the world and second in Europe, behind only Oxford University. No matter what subject you choose to major in, studying here will be a pleasure as the university is home to some of the best research labs in Europe.

With its relatively low tuition fees (compared to some other countries on this list) and the number of scholarships given to international students, it’s no surprise that Japan is becoming one of the most popular study abroad countries. Japan is home to five of the world’s top 100 universities all of which have their own state-of-the-art research facilities. Close to 300,000 students choose Japan as their destination and that number will probably become even higher as Japanese universities race to attract more international students. And with so many unique things you can do only in Japan, one can never get bored there.

Are you looking to study in a non-western country and learn a lot about a culture that’s different than anything you saw before? In that case, you should seriously consider studying in China as an option. As the Chinese economy keeps growing, their universities get better too. At the moment, mainland China has six universities in the top 100. However, if we include Hong Kong and Taiwan, it actually has 12. Additionally, Chinese universities keep investing more in research and stimulating their students to conduct independent research studies.

Singapore is one of the “Four Asian Tigres” and one of the freest economy in the world. Additionally, Singapore has four official languages (English, Malay, Tamil, and Mandarin). This makes Singapore a great choice for students not only from the western countries but also from China and India. There are a lot of good reasons to study in Singapore with the biggest one being quality education; Singapore is home to two of the top 15 universities in the world. However, the country’s great location is another reason for students to choose Singapore because getting cheap flights to countries like Thailand and Indonesia is super easy.

France sits at the top of most people’s bucket list and perhaps this is one of the reasons why so many international students choose it for their studies. However, France also happens to have more than 3,500 universities and colleges, three of which rank among the top 100 in the world. So, if you’re looking for a good university, you can enroll in one of France’s top colleges. Just keep in mind that there are a lot of great programs in English but to truly experience the most of French culture, you should at least try to learn some basic French while staying there.

You probably heard about the natural beauties of New Zealand, the scenic trails from LOTR, and the fascinating Maori culture. But did you know that you can also get a good education in the Land of the Kiwis? New Zealand invested heavily in the country’s higher education in the last few decades and it’s paying off. Even though there’s only one top 100 university in the whole country (University of Auckland), there are many more ranking in the top 500 and attract more than 50,000 international students every year.

Germany is arguably the top study abroad destination for non-English speaking students from around the world. It’s also the third most popular destination for international students after the US and the UK. 13 German universities rank in the top 250 and almost every bigger city in Germany has a world-class university.

What makes Germany even more attractive are the low tuition fees and scholarships that allow many international students to study in German universities for free. Moreover, Germany is a very student-friendly country; there are a lot of coupons and discount for students, making student life much more affordable.

Did you ever get the chance to study abroad? Which are the best study abroad countries in your opinion? If you could choose now, where would you choose to study? Let us know in the comments. 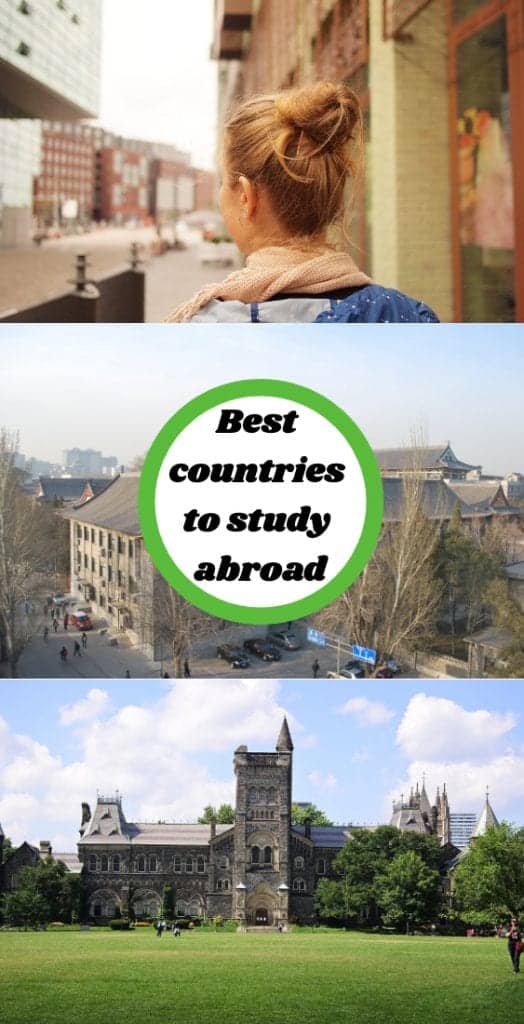 Agree these are some great countries to study abroad. I've had friends and cousins studying in Singapore, UK and US and they have a lot of good things to say about the education over there. Glaring difference in standards of education between those countries and ours.

It is a pity but I'm not a student anymore. I was supposed to go to Denmark for Erasmus, but unfortunately, I had to cancel it for personal reasons. If I were a student now, I would definitely take the opportunity to go abroad. From the locations you mentioned, the most attractive to me is Canada. I've never been there, but it seems to be a beautiful country.

I'd be happy going to any of those nations but for my money, I'm going to Japan. I cannot get enough of the cuisine and I feel like with a culture that rich you could really dive into it!

So great to see the US on the list! I would also add Australia where I studied abroad. Such a life changing experience to get to see another part of the world during college!

A lot of my friends have been studying in Japan and US. These two countries are best for Indian students.