Why should you visit Georgia: a unique country caught between two worlds

The English name Georgia derives from the antic Greek word Georgios meaning farmer. This is a very picturesque name for this country even today, as around 52% of Georgia’s population is employed in agriculture. However, many people mix this country with the US state Georgia. And you have no idea how frustrating is for Georgian people to explain where they are from. It was a real challenge finding information about this lovely country before I visited because the internet is overwhelmed with information about the US state.

The local name or how Georgians call their country is slightly different though. It’s Sakartvelo. Georgia or Sakartvelo is the northernmost Caucasus country in this beautiful slip of land nuzzled between the Black and the Caspian Sea, bordering Russia on the North, and Turkey, Armenia and Azerbaijan on the South and East. And here’s when the big dilemma pops up. Is Georgia part of Asia or Europe?

Georgians belong to the Caucasian race and they are Orthodox Cristian, which means they have more cultural similarities with Europe. However, they are located on the East from Turkey, which technically comes under Asia. On the other hand, the Georgian language is unique, not deriving from any other language. They technically have three alphabets but officially use one. This alphabet has some of the hardest sounds that seemed completely impossible to pronounce to me. The most impressive part about Georgia is that they managed to preserve their identity despite the strong influence of their mighty neighbors, Russia and Turkey. Georgia isn’t quite European, nor is it Asian. That’s why I say Georgia is a country like no other.

A small country with a lot of diversity

Georgia is divided into 11 regions with the capital residing in Tbilisi. If you’re not from around, then try pronouncing that. Tbilisi is a bustling, multicultural city with Narikala Fort looming over the city. There are many places to visit in Tbilisi but the Old Town is one of the most charming places I’ve seen. You can find an Orthodox church, a Catholic church, a mosque, and a synagogue in the same neighborhood. If you’re planning to visit this marvelous city, also check this amazing list of 23 things to do in Tbilisi. 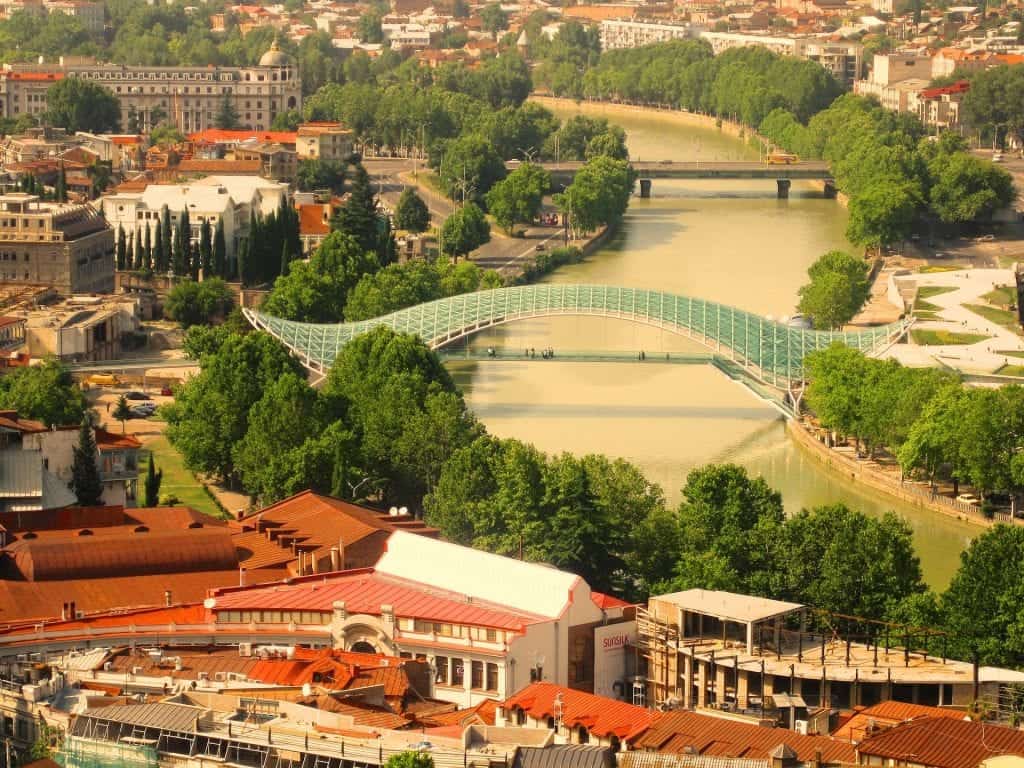 The country is conveniently located between the Greater and Lesser Caucasus Mountains. And these mountains probably have a critical role in preserving Georgian identity as we know it today. The fact that the whole country is surrounded by mountains made it rather difficult to conquer throughout history. Not only that, but these mountains protect Georgia from the blistering cold air masses of Russia and the hot and dry streams that penetrate from the Middle East. That’s why the country has a perfect weather, with both moderately cold winters and moderately hot summers.

Area-wise, Georgia is a pretty small country. However, it has surprisingly diverse landscapes for its size of 70,000 square kilometers. Georgia has Mount Shkhara, which is over 5,000 meters above sea level.  Concealed within the hills lie Javakheti volcanic plateau and the Southern Georgia volcanic plateau. They are both, unstable geological regions with a lot of hot springs and mineral water and a lot of seismic activity too. Finally, caves. So many of them. A couple of worth mentioning are Melouri Cave, which is still not fully explored and Krubera Cave, officially the deepest cave in the world that goes 2,000 meters underground. Furthermore, Georgia has some amazing waterfalls, the absolutely stunning Martvili Canyon, and the gorgeous blue lake in Abkhazia. Finally, they also have a big port city in Batumi and some pretty nice beaches on the Black Sea coast.

Related: why should you consider visiting Yerevan?

Where to start? You thought France and Italy have the best wine in the world? That’s because you probably didn’t visit Georgia. These guys started making wine 300 years B.C. Georgia is unofficially the birth crib of this amazing drink we love so much today.

Georgians also love cheese. They have so many different kinds of it. Salty Kulguni, stringy tenili, different kinds of guda, Imeruli cheese… You name it. They even have a dish that has cheese inside of cheese.  Georgians also eat a lot of meat. So if you’re a vegetarian, good luck. But if you’re a meat lover you’ll love it here. Like I said they eat a lot of meat. Even their soups are full of meat.  Georgians consider rice a food for poor people. And they eat a lot of bread too. They have a variety of different types of bread. The most famous one is Khachapuri which has the status of the national dish. It’s kind of like a Georgian pizza with a lot of cheese and a fried egg on the top. I also must mention Khinkali, which is the Georgian version of a dumpling. A giant dumpling.

A large portion of Georgia’s land is fertile and there are a lot of different fruits growing here. You can buy a lot of fresh fruits on the street market and you can find fresh fruit juice every 100 meters when walking in the street. Sounds tempting, doesn’t it? Check out this more detailed article about Georgian cuisine to learn more about it.

Another reason to visit Georgia is its warm people. There’s a saying in Georgia that says: ‘Every guest is a gift from God’. And the Tbilisi airport has a free Wi-Fi network that goes under the name ‘Tbilisi Loves You’. Now, the thing is, at first sight, all Georgians look like the typical bad guy from a Hollywood movie but they are generally very warm and welcoming people. Like I said, guests are a sacred thing for Georgian and they will do everything in their power to help you in any way they can. Even though many of them don’t speak English, their generosity and hospitality are on another level.

Places to visit in Georgia

I’m going to try to make this list short, mentioning just the best of the best but trust me, Georgia has a lot to offer.

Another city whose name is super hard to pronounce. Yeah, Georgia has plenty of those. Mtshketa is the oldest city in Georgia, the former capital, and a UNESCO heritage site.

Located in the North-West, this city is known for its breathtaking architecture and picturesque, fairytale-like landscapes. Svaneti has a number of UNESCO heritage sites.

One of the most beautiful parks I’ve seen. It’s the ultimate winter idyllic place. It gets pretty cold in the winter but Borjomi is worth it. The town also has a countless of sources of mineral water famous across the country.

Ushguli is one of the highest villages in the world sitting at 2,200 meters above sea level. The village is famous for the Svanetian protection towers. Comfortably tucked in the mountains isolated from outside influence Ushguli looks like a medieval town that got stuck in time.

Stunning. Breathtaking. Mesmerizing. I’m running out of words to describe Martvili Canyon; one of my favorite places in Georgia. On the road to Martvili, you can also stop by the Prometheus Cave. According to the Greek legend, it was this cave that Prometheus was chained in when he angered Zeus.

The best skiing resorts in the country and the ultimate winter paradise.

Finally, my favorite Gergeti Church. Elevated at 2,170 meters under the Kazbegi Mountains you will find Gergeti Church. One of the most beautiful churches I’ve seen at one of the least accessible places I’ve seen. There is a road leading to the church which is in terrible condition and not recommendable if you have a weak stomach. So if it’s not too cold, I suggest hiking to the top. The view along the way is amazing.

A few things I didn’t tell you about

You might think that Georgians don’t like Russians because they basically took a part of their land in Abkhazia and South Ossetia. Today, these two are autonomous regions heavily influenced by Russia. But Georgians actually love Russia and most people still speak Russian. Far more than English, for that matter.

The most famous Georgian? Many people don’t know this but Joseph Stalin. He was born in the small town of Gori. And Georgians are actually proud of the notorious dictator and are not ashamed of the things he did.

In conclusion, Georgia is elaborately hidden, rustic, yet modernized, medieval-looking like country caught between two worlds that refuses to identify with. With its own vibrant heritage that passed the test of time.

Get the cheapest flights to Georgia with this Air France’s Discover the World at a low price program. I use it for my flights and I saved hundreds of dollars throughout the years.

If you’re a student visiting Georgia, this STA Travel deal can get you up to 25% off on your flight to Italy.

If you don’t have travel insurance, I personally use and recommend World Nomads.

If you want to rent a car in Georgia, get 25% off with this Sixt special offer.

To save on accommodation in Georgia, use this Booking.com discount. Alternatively, use this offer and save when staying at all Radisson hotels in Georgia.

And last but not least, don’t forget to check whether you need a visa for Georgia. If you do, you can easily obtain it through Ivisa. It’s affordable, quick, and hassle-free.

Did this article give you enough reasons why to visit Georgia? Let us know in the comments!

Spread the Love
Depression after travel: how does it feel like to live in one place after years of traveling? Comprehensive travel guide: Discover Singapore in 24 hours

21 Things you can only experience in Georgia and nowhere else

The 17 most isolated cities in the world