Our world is filled with beautiful sights, charming villages, majestic waterfalls, scenic beaches, and ancient castles that look like they came out of a fairy tale. Places capable of captivating and inspiring even the greatest minds of writers and directors. So, if you’re ever traveling around the world thinking that a place looks too good to belong to this world and it looks like it came from a fairy tale, chances are, it probably did. You’d be surprised to see how many places around the world actually inspired fairytales. This article is about them; here are 21 amazing fairytale places around the world that served as an inspiration to some of the world’s most famous tales.

In case you’re not familiar with the term, alcazars are types of Moorish castles that were built in Spain and Portugal during the Moorish rule. That’s why there are many beautiful alcazars on the Iberian Peninsula but none can compare the El Alcazar de Segovia, a castle so beautiful that it inspired Disney’s “Snow White and the Seven Dwarfs”. The castle dates back to the 12th century and it had different purposes throughout the years; it was a military fort, a college, a royal residence, a prison, and today, it’s a museum and one of the largest castles in the world.

This popular Disney cartoon was based on Carlo Lorenzini’s novel, “The Adventures of Pinocchio”. As we have mentioned in our articles about fun facts about Florence, the book was written in Florence but Carlo Lorenzini’s hometown is actually the village of Collodi which is why he later changed his last name to Collodi. Anyway, back to the village; it’s easily one of the most picturesque, Instagrammable destinations in Italy and it’s no wonder that the tiny houses, narrow cobblestone streets, and beautiful surroundings of this Tuscan village inspired one of Italy’s most iconic fairytales.

Yes, this might come as a surprise because Switzerland is a landlocked country and a significant part of “The Little Mermaid” takes place at the ocean. However, once you see the castle of Chillon on the shores of Lake Geneva, you’ll see the striking resemblance to the castle from the fairytale. Chillon Castle is completely surrounded by Lake Geneva, the towers are identical, and even the narrow windows look the same.

When speaking of fairytale places around the world, we just have to mention Neuschwanstein Castle. If you’re wondering where does it look familiar from, it’s from “Cinderella”. The castle in “Cinderella” is an identical replica of the Neuschwanstein. It was constructed by King Ludwig II of Bavaria and its pointy towers, arched gate, and also all-around marvelous architecture have been leaving tourists in awe for years.

Alsace, France- “Beauty and the Beast“

If there’s a competition for the most amazing fairytale places in France, it’s likely that Alsace will be the winner. This charming region is worldwide-famous for its hidden gems, rolling countryside, and picturesque villages. A couple of them (Colmar and Eguisheim) were even an inspiration to Disney’s directors when creating “Beauty and the Beast”. In Colmar, you can even find the exact same fountain that Belle was singing on in Disney’s picture.

That’s right; the iconic Mont Saint Michel is the castle from Rapunzel. This unique islet that’s periodically cut off from the rest of France by tidal waters was an inspiration for the Kingdom of Corona in “Tangled”. The castle’s mesmerizing beauty and its remote location make it one of France’s most popular tourist attractions but I bet a lot of people leave struggling to remember why this castle looks familiar!

Okay, this one is rather obvious; its name is in the title too. The gorgeous cathedral is one of the world’s finest and most valuable architectural masterpieces and millions of people visit the Notre Dame every year to admire its beauty. Disney’s picture showcases different parts of the cathedral in great details and even the representation of the surroundings looks very precise to the actual reality.

This is another obvious choice, as Disney openly registered Merida’s clan with the Scottish Register of Tartans. And if you ever visited Dunnottar Castle, you’ll remember the scenery forever; the countryside that surrounds the castle is one of the lushest and greenest places in the world and a perfect pick for one of Disney’s fairytales. Looking at the surroundings, you’ll get the vibe of a place that hosts Medieval magic events and archery competitions, just like in “Brave”.

Even though you might not recognize it right away but if you look closely, you’ll see that this pristine and unfrequented part of England was an inspiration for the crew working on “Winnie the Pooh”. If you have enough time and willingness to explore, you can find several places that are identical to some of the scenes in the cartoon. The crew sure did a great job of replicating the outstanding beauty of the forest to near perfection.

Did you know that the house in which the Darling family lives is located in London’s Bloomsbury? The house was an Edwardian-era townhouse with a nursery. It’s located at one of the corners of the neighborhood but Disney never stated precisely which one is it. However, despite this, you’ll probably still notice that the entire neighborhood looks very familiar.

When brainstorming ideas about fairytale places, I can completely understand how Norway’s breath-taking landscapes would come into the conversation. After all, what beats snowy rural towns and magnificent fjords? If you’ve seen “Frozen” and visited Balestrand, you’ll inevitably notice the resemblance of the surroundings of St. Olaf’s church; the amazing scenery, the wooden churches, the distinguishing local architecture, and even the animals- everything is the same!

Judging by the clothes people are wearing, the appearance of the streets, and the background music, “Aladdin” surely takes place somewhere in the Middle East. However, Princess Jasmine’s palace sure looks a lot like the great Taj Mahal. Despite being located in India, the Taj Mahal is perhaps the finest jewel of Islamic architecture in the world because, let’s not forget, India was under Mughal rule when this ivory-white marble mausoleum was constructed.

Words do little justice to Angkor Wat, Earth’s largest religious monument and one of the world’s Seven Wonders. And it’s not surprising that something so majestic would inspire a fairytale-like “the Lost Empire, the city of Atlantis”. Yes, the story is based on the sunken Greek city but visually, if anything on our planet is as vast and majestic that it resembles a lost ancient civilization, it has to be the Angkor Wat.

Disney’s “Mulan” is an adaptation of an old Chinese folk tale (The Ballad of Hua Mullan). The fairytale dates back to the 5th century and the animated movie sure did some great research; the scenery portrayed in the movie, the plot, the Great Wall of China, and even the Forbidden City of Beijing look as close as it could to a 5th century setting in the Chinese capital. Today, the Forbidden City and the Great Wall are two of China’s most spectacular and also most visited tourist attractions.

The mystical Inca ruins located 2,500 meters above sea level still make the whole world wonder how did the Incas build such an advanced architectural masterpiece at this height at this point in civilization. Hence, it’s no surprise that Machu Picchu is a part of this list of fairytale places that were so beautiful that they served as an inspiration to actual fairy tales. Disney’s animators drew their inspiration for Kuzco’s empire in “The Emperor’s New Groove” from the ruins of Machu Picchu.

The destination Paradise Falls in the movie “Up” looks a lot like Angel Falls in Venezuela; one of the world’s most scenic waterfalls that leave even the best wordsmiths speechless. Angel Falls flows from Auyantipui Mountain and with 980 meters (3,212 feet) is also the world’s highest uninterrupted waterfall. And if we would have to make a list of the best fairytale places on our planet, these waterfalls would make the list every time.

When you compare the landscapes of this beautiful Polynesian island with Mounui, Moana’s Island, you’ll inevitably notice that the two look almost identical. When searching for inspiration for “Moana”, the crew was traveling to Fiji, Samoa, and Tahiti to learn more about the indigenous people and get inspiration for the movie. In the end, their final choice was Tahiti.

When you need to draw something as large as Game Central Station from “Wreck-it Ralph” what can serve as better inspiration than one of the world’s greatest rail stations, New York’s Grand Central Terminal? The interior and the nomenclature of the two look incredibly similar.

Louisiana Bayous, USA- “The Princess and the Frog“

The bayous of “The Princess And The Frog” have been undoubtedly inspired by Louisiana’s real-life slow-flowing rivers and swampy lakes. In Louisiana’s bayous, you can find catfish, turtles, and even alligators and if there’s any place on Earth that can give someone an idea about a tale that features supernatural swamp beasts, it’s definitely the bayous of Louisiana.

It’s rather obvious that “Lilo and Stitch” takes place somewhere in Hawaii. The graphics and landscapes that the movie showcases are most likely on the island of Kauai and Stich, the puppy who’s an alien in disguise works on an experiment that brings other aliens to stay on the garden island. And we certainly can’t blame them for wanting to stay on some of Earth’s most beautiful islands.

Finally, this list of fairytale places can’t be complete without one of the most legendary Disney movies; “The Lion King”. It’s quite obvious that the Lion King draws its inspiration from the Serengeti plains of Tanzania. Serengeti means endless plains in the local Masai language and these plains host the largest animal migration in the world every year when millions of gazelles, zebras, eland, and wildebeest explore the Serengeti’s never-ending plains in search for food and resources. After the movie was released in the 1990s, the Serengeti has become one of the most popular tourist attractions in Africa.

Now, it’s your turn- did you know about any of these fairytale places? Did you have the chance to visit some of them? Feel free to share your thoughts in the comments! And if you liked this post, make sure to check out this list of the best wanderlust quotes that will ignite that travel bug inside you. 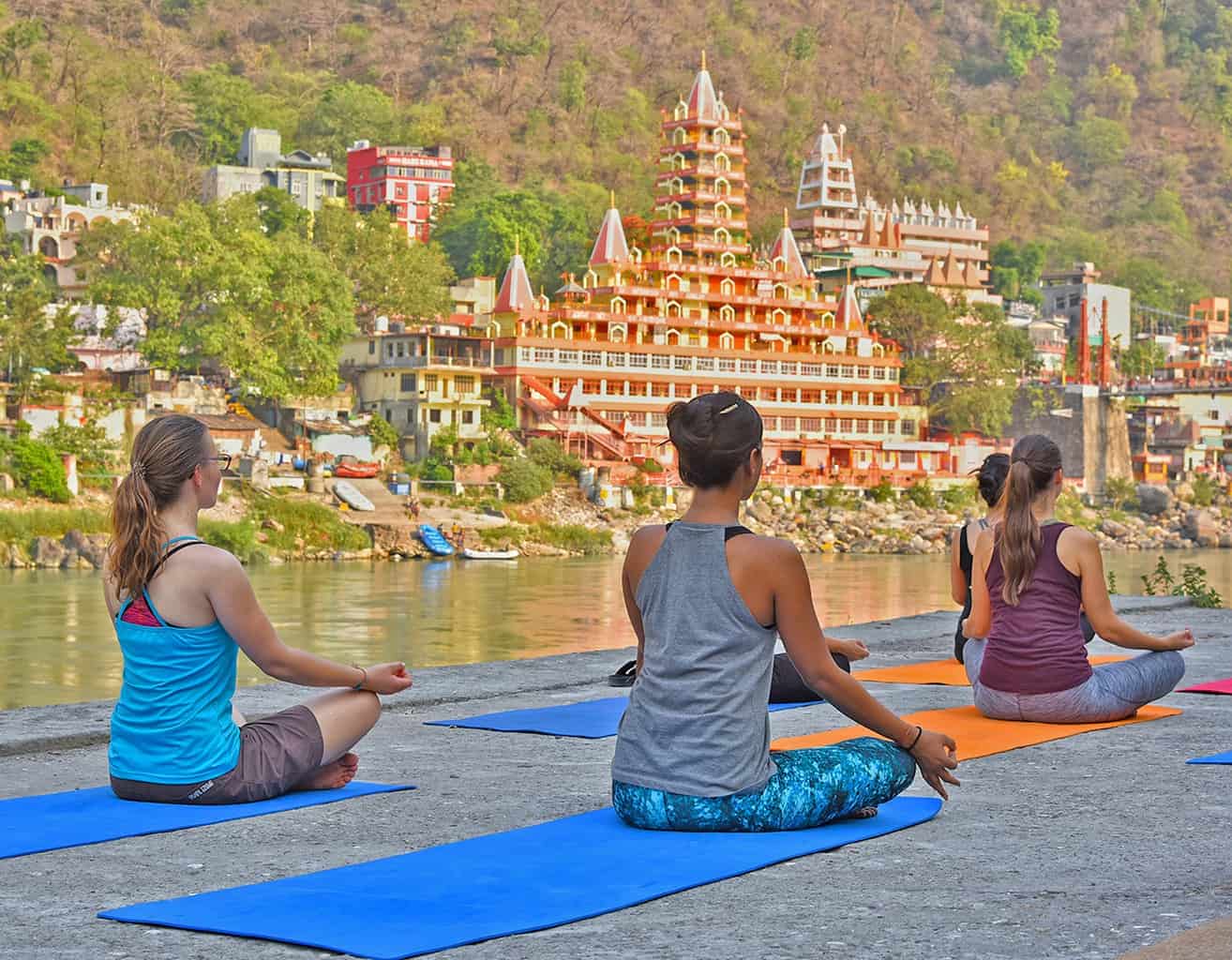 Next
8 Reasons why you need to undergo yoga teacher training in India
Click here to cancel reply.

Oh my god, these beautiful places are amazing. I can't wait to see them live.

I hope you get the chance to visit all of them someday, Steve.